Just got this awesome excerpt from Ada Adams' upcoming sequel to ReVamped. If you remember, I did a cover reveal which can be viewed here. 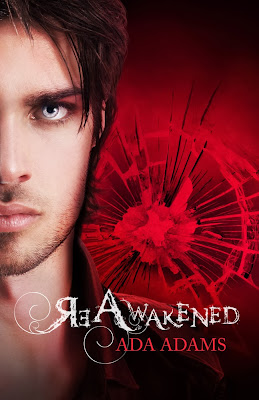 My two-story fall was cushioned by the intruder’s body. He—a vampire, I realized—groaned as I landed on top of him, forcing his body into the muddy ground. I reached for my dagger, but he was quicker. Before I had a chance to pull it out, he slipped out from underneath me, flipping me over so that he was on top. His firm, muscular body pressed tightly against mine as his hands pinned my wrists to either side of my head. His face was covered by shadows, but I could make out a mischievous smirk dancing across perfectly-shaped full lips.

“You’re quite feisty, aren’t you?” he chuckled, bending forward to examine me. Deep, charcoal eyes overflowed with amusement.

He was actually enjoying this.

“I don’t wanna hurt you,” he whispered in a deep, throaty voice. “I’m gonna release you now. Don’t do anything stupid.”

He lifted his arm, removing his right hand from my left wrist. The moment I felt some freedom, I leaped forward, attempting a left hook at his jaw. He blocked my hand, once again pushing it toward the ground.

“I said I wasn’t going to hurt you!” he growled, pinning me even further into the soft, wet earth.

“Yes, but I never said I wouldn’t hurt you,” I snapped.

He brought his face toward mine. “I’d like to see you try,” he whispered.

I raised my head—the only part of my body that wasn't restrained by the stranger’s body—inching my lips closer to his. He tensed for a moment, his eyes searching mine, as if surprised by my sudden change in behavior. Drops of rainwater slid down his chiseled jaw, pausing briefly on his lips before they plummeted onto mine. Then, a slow, smug smile spread across his face. I felt his body relax and he leaned even closer. His breath caressed my skin as his lips drew near.

It was exactly what I needed. Summoning all my strength, I twisted my hips to the side, shooting them up and out, then launching my legs from the ground. Thrown off-balance, my captor groaned and released one of my arms to brace for the fall, giving me the perfect opportunity to reach for my dagger. In one smooth move I darted behind him, placing him in a secure headlock—the blade of my weapon aimed directly at his heart.

“Who are you?” I demanded when I was certain he couldn’t escape my grip.

“I’m a twenty-four-year-old Taurus who enjoys long walks on the beach.” Even though I couldn’t see his face, I could feel his arrogant grin.

“You have ten seconds to explain yourself,” I ordered. “And then I’m really going to hurt you.”

“Oh, come on! Can’t we get back to kissing? You can’t tease a guy like that.”

“Ten, nine…” I pressed the dagger deeper into him, nicking the leather of his jacket.

“What kind of a name is that?”

“What kind of a nickname is that?”

“Spike, Blade, Fang—all the good, pointy objects were already taken by fictional characters. It was the best I could do.”

What do all think? Pretty cool, huh?