Today my blog got invaded by the evil pixies, C. L. Raven...again...They're here talking about their new book Soul Asylum. Thankfully, they put everything back where it belongs and took the RedBull I left as an offering. They did mention a giveaway. I suppose I should do it. :D Leave a comment and I'll pick one of you to send their way (as another offering!). They're giving away copies of their ebooks, bookmarks, postcards, and magnets. One rule, if you want to win, you MUST be follower of my blog + leave a comment in relation to this post. I'll need your email address to send to them. I'd be more creative, but it's late and I've had a long day. ;-D

So, without further ado, I turn it over to C. L. Raven.

We were going to write a blog post about Soul Asylum, but then we figured there was someone much better suited to the job. Mason Strider, a journalist who visited Ravens Retreat asylum determined to expose the ghost tours there as a con. Instead he exposed the asylum’s twisted heart.

After writing about Soul Searching, the ghostly tour of Ravens Retreat, I was invited to spend a few days there. Ravens Retreat is the West Wing of an old mental asylum, half of which burned down in 1904, killing staff and patients. It is believed the fire was started deliberately by one of the patients. During my stay, I participated in an Ouija board, in which the poltergeist claimed he wanted revenge. The glass then smashed. Doors slam, fires ignite and the temperature plummets. Objects are thrown and people are pushed, punched or threatened.

I’ve witnessed this ghost holding a written conversation with the asylum’s owner, in which he claimed the asylum isn’t just haunted by him, but a legion of ghosts of the unfortunate patients and staff who are doomed to spend their afterlives locked away in the asylum. Threatening messages were written on my bedroom wall in blood. I would never have believed the messages were the work of a poltergeist had I not been in the room when they were written. The ghost has, on numerous occasions attempted to take Mr. Soul’s life. I was forced to leave the asylum before events turned lethal.
Throughout the night, screaming, crying, shouting, keep me awake. The sound of wheelchairs being pushed echo along the endless corridors, accompanied by the jangling of the attendants’ keys. The poltergeist wanders the asylum, like he’s searching for something. Maybe that’s what’s keeping him here.

There is something rotten in Ravens Retreat and I’m determined to find the cause of the poltergeist’s eternal torment so his soul can be laid to rest.

His relentless persecution of Soul is interesting. If he really wanted to kill him, he would do it while he slept. He wants Soul to live in a state of constant fear. Soul doesn’t know when the poltergeist will eventually grow bored of him and kill him. Living with that fear every day is far worse that his inevitable death. Soul is a toy. Something to amuse him until more unsuspecting guests arrive. Without Soul, nobody would visit the asylum. He would be alone for eternity. He needs Soul to make his existence meaningful. At times I think he doesn’t realise he’s dead.

I’ve never seen this ghost. Maybe he was a patient who died in the fire in 1904. Maybe he lived here after that and was murdered. I don’t know what drives him to kill. The fear gives him power perhaps. The only way to stop him is exorcism or to stop guests visiting the asylum. Soul refuses exorcism. I can’t help feeling he needs the poltergeist as much as the poltergeist needs him. They’re both alone. They have a strange unexplainable bond, except one is alive and the other is dead.

I plan to research this asylum more thoroughly. Delve beneath the mask it showed to the world.

This is no longer a simple story about a ghost tour in a creepy asylum. The present and past have collided in a truly horrific way. Ravens Retreat has risen from the dead and is hungry for revenge. 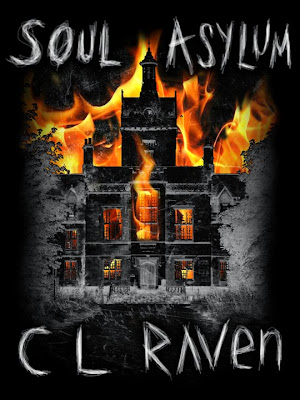 The blood wanted to prick a conscience that couldn’t bleed.
Poe could keep his telltale heart.
I couldn't hear it beating.

Ravens Retreat harbours a sinister secret. Inside its blackened heart lurk the ghosts of patients and staff who died when the asylum was burned down in 1904. Over a hundred years later, the West wing survives and now the patients want revenge.

Their eternal repose is disturbed by a malevolent poltergeist and the ghost tours led by the asylum’s resident, Phineas Soul, which attract the attention of journalist Mason Strider. His attempts to expose Phineas as a fraud have catastrophic consequences when it is Ravens Retreat’s dark heart that’s exposed as it awakens to claim the lives of those who dare to enter its brutal past.


Some things should never be disturbed.

Buy Gunning Down Romance
Posted by Andrew at 1:00 AM