That being said here it is. An excerpt from her second book in the Lichgates series. If you haven't picked up the first one, you should. It's a beautifully crafted book.

Excerpt from chapter one
In the hidden world of Ourea, there are too many beautiful places to name: rose-covered cliffs tower miles over the valleys and forests below, cities thrive in submerged ecosystems beneath the sea, and the dragons that once ruled volcanoes are now but fossils in a cave. The creatures of human myth flourish in Ourea. Trees are this world’s skyscrapers. Magic is its currency. And while the rest of Earth forgot what it means to dream big, Ourea kept alive its wonder.

At least, that’s how Kara saw it.

She sat on a ledge in a cave, a dozen feet or so above an indoor river littered with rapids. Green sunlight poured through a crack in the ceiling, its rays tainted green from the branches which blocked her view of the sun. The light danced across the river, illuminating the white foam that splattered into the air as the water rushed by below.

Kara dangled her legs over the edge, listening to the chorus of water roaring through the cave. The ledge on which she sat served as a catwalk through the cavern. Several more ledges lined both sides of the cave, but she hadn’t yet figured out how to get to them. She stared up at the ledge ten feet above her, her eyes following the natural walkway until she came across a missing chunk a few yards off. Maybe she could climb that someday, but all she wanted now was to relax.

Her ledge wound around a bend in the cavern wall and toward a waterfall that fed the river. Behind the waterfall was a flight of stone stairs that led to a dirt trail, which curved through a forest for about a mile before it opened out into the Vagabond’s village—her village. And there, somewhere in the myriad of empty houses and vacant rooms, Braeden was probably starting to realize she’d ditched their sparring practice for the day.

Kara eyed her satchel, which lay empty against the cave wall. Flick—the red, teleporting ball of fur that he was—was out and about exploring the cave. The Xlijnughl (Zyl-LEYN-guhl ) could find trouble anywhere, so she hoped he would stay close. She would just have to keep an eye out for him.

Her stomach growled. She glanced through the tree branches above to take a guess at the time, but she couldn’t even see the sun through the leaves. As much as she wanted to believe Braeden wouldn’t find her little haven, she knew better. Braeden could track anything. That prince could track a month-old trail if he wanted. There was no escaping him, not that she would ever really want such a thing. Not after all he’d done for her.

She sighed and leaned her head against the cave wall. Pebbles broke off as she pushed against it, so she grabbed one as it fell and chucked it over the edge.

Braeden had guarded her while she visited the yakona kingdoms. He’d helped her bring them together in a loose sense of the word. He’d saved her life when she fled Hillside. She shuddered—her brush with Gavin had been too close. He’d tried to trick her into wearing a poisoned tiara that would have made her his slave.

She scoffed. None of this even sounded real. This world couldn’t be real. She would wake up from her coma any day now. That had to be it. A secret world hidden beneath the human race’s collective nose couldn’t be real.

“You scrunch your eyebrows when you’re lost in thought.”

She blinked her eyes back into focus. Braeden sat next to her, even though she hadn’t even heard him on his way across the ledge.

He watched her with that half-cocked grin of his. Black hair framed his face, longer now than when she’d first met him a couple months ago. A few beads of sweat rolled down his temple, tracing his olive skin in a pattern she wanted to mimic with her finger. His dark eyes caught her in their gaze, and she forgot how to breathe for a moment.

She laughed and punched his shoulder. He teetered and reached for her, grinning as if he was about to pull her over with him, only to scoot a little closer once he righted himself. Though he would never throw her off a cliff, Kara pulled her feet onto the platform all the same once he started laughing, too.

“You shouldn’t push people who are sitting on ledges, you know,” he said with a wink.

He nudged her shoulder. “Doesn’t mean it wouldn’t hurt.”

“Ungracious apology accepted.”
She laughed. She couldn’t help it. Even if her mind had created Ourea as some elaborate defense mechanism, she would stay just to be near him.

But Ourea was real. She’d escaped armies, decapitated shadow demons, and had too many scars for it to not be real—and the gravity of her dangerous new life sent bile into the back of her throat. The people vagabonds loved died. Every time. Thus, why she couldn’t have Braeden.

She caught his eye and forced a smile. “Yep.”

He narrowed his eyes as if waiting for her to crack under the pressure. She wouldn’t. She wanted what she couldn’t have. It was as simple as that.
******* 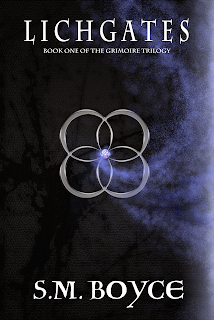 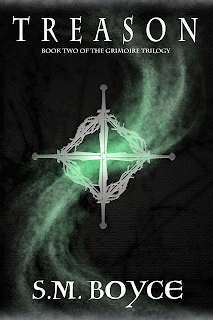 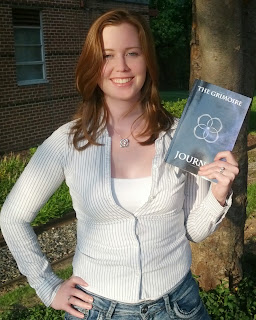 S.M. Boyce is a fantasy and paranormal fiction novelist who also dabbles in contemporary fiction and comedy. Her B.A. in Creative Writing qualifies her to serve you french fries, and she updates her blog a few times each week to keep you entertained.

Click here if you have problems with the above widget by Vocaroo.
Posted by Andrew at 2:05 PM