DIVINELY RUINED, from Entangled Publishing and the author who brought you ON ONE CONDITION, is hitting the virtual shelves on Thursday, April 26th, but you can get a sneak peek at the cover and blurb here! 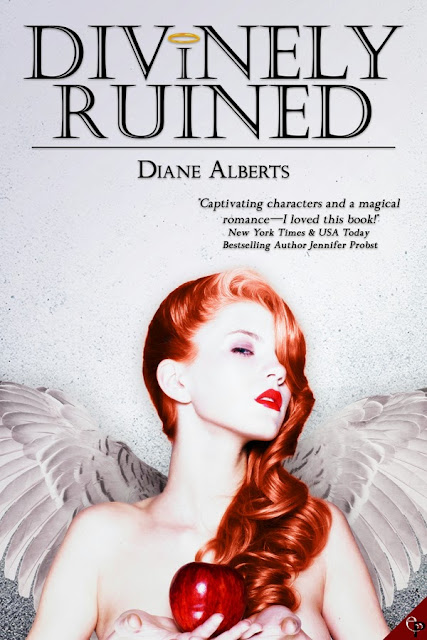 Rebecca's life sucked before she became an angel. Crappy apartment, awful jobs, abusive boyfriends--it was no wonder she jumped at the chance to escape it all and become a real live angel. The problem is Rebecca's not very angelic, and she'll have to do more to earn her wings than end her love affair with the word f--er, frick.

Especially when she's assigned to save single father Tony Weis, whose less-than-pure thoughts wreak hell on a telepathic angel's nerves. It's all Rebecca can do to keep her hands off him...but when she loses her memory injuring herself to save Tony's daughter, now it's Tony's turn to be her angel and care for her. But will Tony's devotion tempt her from her angelic path, even if it means being human again?

...To learn more about the author and her other projects, go to: www.dianealberts.com
Posted by Andrew at 5:00 PM