That was easy...ok, maybe not and #writemotivation update 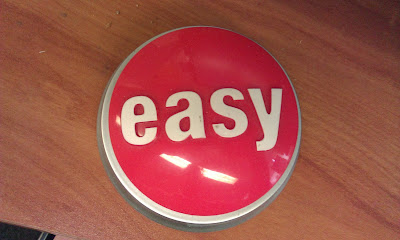 I actually have an easy button, it is supposed to make things easier. Isn't that what the commercials say? If only that were true...but I digress...I think.

Anyway, May has not been going as planned, but most plans don't. By the end of April I was supposed to have reached the 40K mark on my WIP. I hit that mark a couple days ago. By the end of May, I was supposed to be finished with draft one. Yeah, um...not gonna happen.  But you know what? It doesn't matter.  The important thing is that I'm working on it. I'm in the middle of ch. 17 and have 24 planned. I've already reworked the first 3 chapters in my head. Once I've finished draft one, I plan on printing it off and then going through with a pen and writing down notes, etc. that I have gotten from betas, or have popped into my head. Anyway, the beginning of the end is near.

#writemotivation update
1) Finish WIP -- I'm currently on ch. 17 of 24. I'll be close, but I don't think it's gonna happen.
2) Cheer on my #writemotivation tweeps -- struggled a little with this, but getting back into it.
3) Blog once a week -- Yup, almost didn't this week, but made myself do it.

That's all I have for today.