Ok. This is a placeholder blog while I work on something more writer related. I promise you'll like this. Also, I have cute pictures. Also, the location for this post is exactly where it happened (approximately)

Ok, Friday (June 15th) I was driving through rush hour traffic. Not an uncommon occurrence on a Friday morning (or any weekday morning for that matter). I was drinking coffee and listening to the local shock jock morning show on the radio.  Traffic slowed down in it's usual place when I saw it, a fuzzy lump on the shoulder of the highway. At first it looked like a dead animal, but as I drew closer, I saw it raise it's head.


What the hell? Is that a Kitten?

After a moment's hesitation, I pulled over, jump out of my car and ran down the shoulder (of a very busy highway no less!), and scooped up the kitten. Her face was bloody and swollen and she had blood on her left hind leg. As I picked her up, I prayed that she didn't have any internal injuries. I gently placed her on the passenger seat of my van and took off. 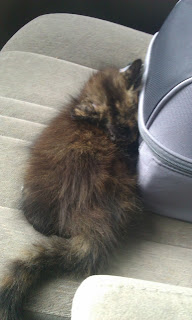 She was a fuzzy little thing and so tiny. She cheeped a little noise when I set her down on the chair before closing her eyes and falling asleep. I eased back into traffic and immediately dialed my vet. I told them what happened, and then found a way off the highway to go back toward the vet (I was going North, vet was South...not important, but oh well). I then called work and told them I would be a little late (they didn't mind...boss loves animals).

The whole way to the vet, I kept talking to the kitten, telling her to hang on and we would be at the vet soon. I kept looking over to check to see if she was still breathing. Which, thankfully, she was. We arrived at the vet safe and sound a few minutes later. After a brief checkup, the doctor told me that she was actually in really good shape considering she was pitched out of a moving car that morning. No internal injuries, just a scratch on her face and a swollen head (and a massive headache!). She spent the remainder of the day asleep at the vet while they kept an eye on her.

The next morning, our older two cats had a checkup (coincidence?). By that time, my wife and I decided to keep the kitten. It was fate, that and she was super cute. When we arrived Saturday morning, we wanted to see Lily again. Vet brought her out. What a difference 24 hours made! 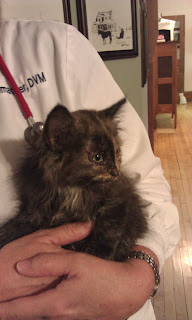 The vet visit was up and down. We got to take Lily home, but we found out our oldest cat, Gracie (a 15 year old rescue) may have cancer (we found out one of the spots was full of eosinophil cells, but are not sure about the other spots). We found out that our next oldest cat, Nikki (14 year old), who has kidney disease, is still doing ok. Her creatnine is high, but it hasn't changed since the last time she was in. So here is Lily, all snuggled in a blanket at our house. We have to keep her isolated from the other pets until Friday because she had worms (which is common for kittens apparently). If you zoom in the picture you can see the cut below her right eye. Considering she was pitched out of a car, she's one lucky little kitten. We think we're pretty lucky too. 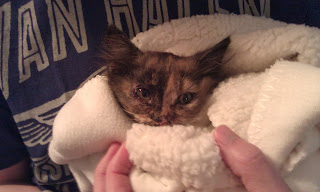 She's a really sweet kitten. Still a little shy, but very cuddly and loves getting pets. She's starting to get a little more playful and kittenish as she gets better. She's got a motor on her that you can hear through a closed door.

WARNING! RANT AHEAD!
Ok, here's a little rant. She was found 3 exits North of a very good no-kill shelter. Three EXITS! That's maybe two miles at most. It would have been nothing to take a minute and drop her off, no questions asked. What soulless, inhuman person would throw a baby animal from a moving car on a highway? To quote my vet, "There is a special place in hell for people like that". If you have a pet, or find a pet, that needs a home, do the right thing. Find them a home. Before I left work Friday, I had to offers to take Lily, and I wasn't even TRYING! It would have been so easy to pop onto Twitter, Facebook, or even Craigslist, and find her a home. And if for some reason, I couldn't find her a home, it would have been really easy to drop her off at a shelter. There are several good ones in my home town.

Do the right thing. It isn't hard and it could just connect you with a special friend. I know it did for me.
Ok, rant done.

INFO
The vet that took care of her: Cat Clinic of Johnson County (we have been taking our cats here for years).
The shelter that was three exits south of me: Heartland SPCA (formerly Animal Haven)
Another really good shelter that we have gotten both our dogs at: Wayside Waifs (Facebook page). Main site: http://www.waysidewaifs.org
Posted by Andrew at 9:00 AM