15 years ago my wife, Susan, met Gracie. She had just lost a cat, named Oliver (a feisty orange tabby), to cardiomyopathy. She wasn't really looking for a new cat right away, she was just going to visit the local animal shelter and look around. As with most no-kill shelters, they had an abundance of cats. One cat caught her eye. I can't remember the breed, but it was beautiful, elegant cat. She had passed over the scraggly, scrawny, sick looking black cat. No way was she taking that cat. No, she would talk to this new, beautiful cat and see what it was like. She was just looking after all.

The black cat, tired of being ignored, opened her mouth and meowed. It wasn't a pretty meow, but it was plaintive. Susan (who was my fiance at the time), tried to ignore her, but every time she turned to the pretty cat, the black one would meow. Completely frustrated, Susan turned to the black cat and decided to give her some attention. Hoping it would shut her up enough so that she could interact with the pretty cat. The scrawny, scraggly, sick looking cat (who may have even had feces stuck in her fur) immediately began purring and rubbing against the cage, desperate for attention.

You can probably see where this one is going.

Yup, Susan picked the black cat.  Her reasoning being, "she kept telling me that I was going to take her home. I didn't have a choice." The vet had no idea how old she was because she was so malnourished from the time she was out in the wild before the shelter took her in. She estimated about a year, but couldn't be certain.

It took some work, a bath, and some meds, but the scrawny, scraggly, sick-looking cat turned into quite the beauty. Once we got the clumps out, her fur was soft and sleek. She loved attention and would curl up next to you every chance she got. Gracie was a sweet, beautiful, cat.

She did have some quirks, like the fact that she would forget she could see in the dark and would start calling for you until you called her name, then she would come in a meow a couple times before hopping up in bed and going to sleep. She was also an amazing jumper. She could jump from the bottom of our entertainment center to the top (close to 5 feet). She also had extra toes (called Polydactylism). Her paws looked like little mittens. It was the strangest thing in the world.

She wasn't a big fan of our second cat, Nikki (a grey and white tabby), but they eventually got along enough that they didn't hiss at each other (for the most part). She also wasn't too thrilled about the addition of small, grabby, baby hands either. I think she spent most of our kids baby-hood hiding out of reach.

The average life expectancy of a cat is between 12 and 14 years.

Gracie was over 15 when she passed. It was sudden, as most illnesses are. We took her and Nikki to the vet June 16th (see this post for details on the visit). They gave Gracie an anti-inflammatory shot. June 22nd, my wife took Gracie to the vet because she looked like she had lost weight and was lethargic. She had lost 14 ounces in 7 days and was dehydrated. Fluids were administered and she perked up. Saturday morning, I took her back, more fluids were given. Saturday night, my wife took Gracie to the pet hospital (BluePearl Veterinary Partners). Gracie was up 7 ounces, but she was lethargic and could barely stand. They kept her overnight and gave her more fluids. Saturday afternoon, Gracie was not responding to the fluids and her blood work had a value on her kidneys that they couldn't even register it was so high.

My wife stopped by to take her home. It was obvious that they couldn't do anything. They told her that Gracie wouldn't last the night. Susan decided that the only humane thing to do was to let her go there at the vet.

We all arrived to say our goodbyes. When they brought her too us, it was obvious she was in pain and had difficulty breathing. 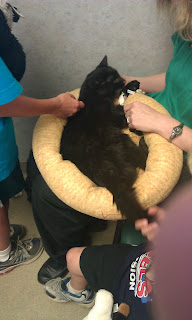 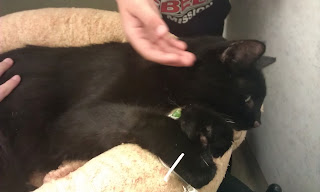 Gracie passed peacefully, June 24th at approximately 7 pm, surrounded by those who loved her most. It was hard letting her go, but seeing her at the end, and the pain she was feeling, it was the only humane thing we could do. As much as we wanted to keep her physically with us, she needed us to let her be free. Free of the broken body she lived in. Free to be at peace.
Posted by Andrew at 11:52 AM