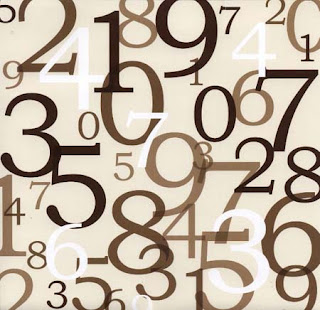 Ok, so I stole the title for this blog post from a far-fetched, but popular TV series. The picture to the left was borrowed from this blog post (who knows where they got it, I don't).

Anyway, so the topic today is numbers. I've got a few. It's funny how much of our lives revolve around numbers. I could spend hours waxing poetically about the philosophical nature behind numbers, but let's be honest, you're probably not too interested in that anyway...even if it is really cool...

Ok. Let's talk about a  few numbers that I'm a fan of.

So, why are these numbers important? Well, the first two just because. The last two are actually very important.

All in all, not bad considering I had a horrible time in English class as a child.

Oh, and because my friend Abigail Kern claimed she was going to scour my blog post for any reference to her witty tweets to me earlier...here they are... :D

Followed shortly by this...and yes...I just made an inappropriate pun, but it wasn't on purpose.