Cover Reveal: The Coldness of Marek by Rachel O'Laughlin

I'm so excited that I get to be involved in this reveal. Normally, I don't know anything about a book before seeing the cover. In this case, I got to read this book way early. Like beta early.

It started out as a simple request. Rachel needed another set of eyes on her story. It was fantasy. I love fantasy and I must say I was NOT disappointed.

All the good stuff. Even in it's beta state, it was awesome. I haven't seen the final version, but I can only assume it is amazing.

So anyway, enough gushing. Let's meet the author and the cover!

Obsessed with all things history, Rachel grew up reading adventure stories the caliber of Rafael Sabatini and only recently fell in love with fantasy as a genre. She lives in Maine with her husband and children, grows roses and tweets often. In addition to reading and writing, she loves coffee, spy series, and alternative rock. 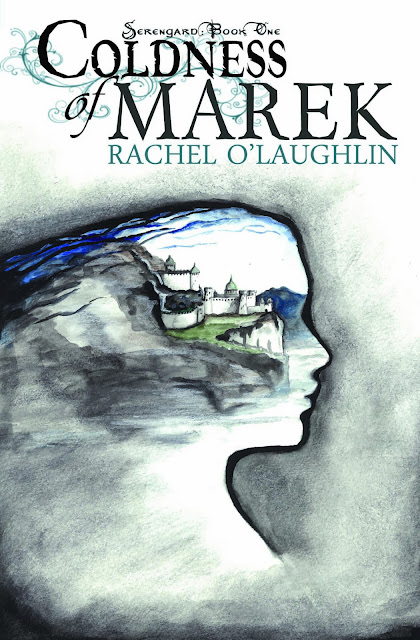 Serengard has been under Orion rule for centuries. Centuries of insufferable adherence to laws and traditions that none of its people ever asked for or agreed to. Raised by her scholarly grandfather in the fiery southern city of Neroi, Trzl is out to turn the monarchy into a free society where knowledge is king and no one has to be subject to the whims of an Orion.

As the rebellion escalates, her choices have an eerie impact on the revolution at large, elevating her to a position of influence she has only dreamed of attaining. But there are downsides to her power: appearances and alliances that must be upheld. One of them is Hodran, a rich rebel who wants to aid her cause, and another is Mikel, a loyalist farmer who wants to destroy it… and who just might be winning her heart at the same time.

By the time Trzl realizes she is in too deep, she has an infant son and a dark mess of betrayal and lies. She runs, to the farthest corner of the kingdom, in hopes she will be left alone with her child. But she has a few too many demons. Someone she once trusted takes her captive among the chilling Cliffs of Marek. She is thrown back into the political mess she helped create… at the mercy of a man she never wanted for an enemy.
Posted by Andrew at 5:00 AM