So, a couple days ago, this happened. 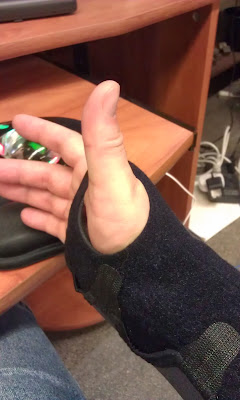 My wrist has been sore for a while, but recently the stiffness turned into pain. It's to the point where I can't write by hand without pain (which I generally only do when writing shopping lists) and I can't fold laundry. Certain movements hurt. I have a doctor's appointment Tuesday. We'll see what he says. I've been wearing the splint for a week and it hasn't improved. I've also been icing it and taking anti-inflammatories.

The theory is that I hurt it at Wifey's bday party. We went to someplace called PowerPlay and I was using this mallet to try and ring a bell. I'd never been able to do that before, but this time I did. I only got 40 "tickets" out of breaking the top score. My thumb was sore from how hard I was hitting the strike plate (I was jumping in the air to hit it) and I ignored it (like the man I am). It was sometime after (maybe a couple days? I can't remember) that I noticed my wrist was stiff.

It got worse when I was getting out of bed one night to use the bathroom. My bed has high sides because it used to be a waterbed (got it on Craigslist so who knows). Anyway, I was pushing off the side to stand up and my wrist buckled. Which hurt (obviously). It's been getting worse and worse since that point.

The good news is that I can still type!

So here are my goals:
Also this last week, I got to go see one of my favorite authors, Tessa Gratton, talk about her new book The Lost Sun. I'm so excited to read this book. In addition to talking about writing, her new book, etc. She read part of her favorite book (and what really inspired her to write) Beowulf. Her version had the old English and Modern translation. It was also translated by a poet so it's more lyrical. Most translations make it prose and they lose the lyrical beauty. Anyway, from the part she read, I totally want to read it now (the version she had and not a prose one). 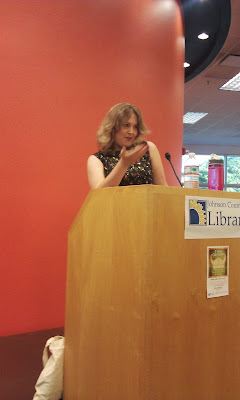 This isn't the best picture, but she moves around a lot when she's talking and I had to take the picture three times (and then my phone died). Anyway, if you haven't read any of her books, I highly recommend them.

After the discussion where she answered some really awesome questions, she had a book signing. I need to take a picture of what she wrote in my book. It's a continuation of what she wrote when she signed my copy of Blood Magic (her first book and my first experience with YA paranormal...like ever). In that copy (that I swear I have a picture of somewhere), she wrote "To that psycho freak who stalks me on Twitter." In my copy of The Lost Sun, she wrote "Still Stalking Me!".

I'll take pictures and post later because it's awesome. The reality is I don't stalk her, but I do admire her. She's an amazing writer and a wonderful person. I've had the opportunity to hang out with on multiple occasions. She is a local author and we are both part of a group of Kansas authors that meets regularly.

The last thing that happened this week was #PitchMAS. I wasn't going to participate because Hate Jacket is with my mentor agent. But, I decided to anyway. I ended up with three requests. One has been sent out, the other two will be soon. I did pitch my two picture books, but nobody seemed interested. Either I wasn't pitching them well enough or I wasn't pitching them when the few people interested in picture books were watching. It was a long shot on those two, but I tried.